In order to understand engagement in DH, one aspect to describe is the configurations of participating people. One approach would be to consider the interactions between different disciplines such as history and computer science. In this post, I will reflect on the concept of disciplines, and discuss alternative concepts of communities of practice and cultures.

Disciplines can be classified according to two general aspects:[1]Becher, T., & Parry, S. (2005). The Endurance of the Disciplines. In I. Bleiklie & M. Henkel (Eds.), Governing Knowledge (Vol. 9, pp. 133–144). Springer. https://doi.org/10.1007/1-4020-3504-7_9 first, the cognitive aspect, the general topical area of expertise and established research methods and resources. For example, history can be described as a discipline topically concerned with events in the past, with hermeneutics and source criticism as established research methods, and archives and libraries as resources. The second aspect is the social, predominantly defined by institutional incorporation such as history departments at universities.

Besides these two main aspects, disciplines can be described and distinguished according to several others characteristics;[2]Sugimoto, C. R., & Weingart, S. (2015). The kaleidoscope of disciplinarity. Journal of Documentation, 71(4), 775–794. https://doi.org/10.1108/JD-06-2014-0082 discourses and methods of communication in journals, the history of a discipline of how it was supposedly founded, and the construction of the boundaries of a discipline. This final aspect is better known as boundary work, i.e., defining what falls within scope by contrasting it with what falls outside scope of a discipline.[3]Gieryn, T. F. (1983). Boundary-Work and the Demarcation of Science from Non-Science: Strains and Interests in Professional Ideologies of Scientists. American Sociological Review, 48(6), 781–795. https://doi.org/10.2307/2095325

Yet viewing DH on the level of global disciplines poses several limitations. Describing historians and computer scientists by their discipline does not cover the different practices within a single department. [4]Tuunainen, J. (2005). When disciplinary worlds collide: The organizational ecology of disciplines in a university department. Symbolic Interaction, 28(2), 205–228. https://doi.org/10.1525/si.2005.28.2.205 Furthermore, collaborators from industry, such as computer engineers building tools, are not covered by the concept of disciplines.[5]Becher, T., & Parry, S. (2005). The Endurance of the Disciplines. In I. Bleiklie & M. Henkel (Eds.), Governing Knowledge (Vol. 9, pp. 133–144). Springer. https://doi.org/10.1007/1-4020-3504-7_9 Especially in considering the digital of digital humanities as consisting of computer scientists, software engineers, computational linguists, and others, DH cannot accurately be described according to disciplines.

Rather than disciplines, an interesting concept is communities of practice (COPs). This framework describes communities according to three dimensions:[6]Wenger, E. (1998). Communities of Practice: Learning, Meaning, and Identity. Cambridge University Press.

Even disciplines arguably constitute a sort of community of practice. For example, the history discipline covers mutual engagement through conferences and journals, a joint enterprise in studying the past, and a shared repertoire in hermeneutics, source criticism, archival research, and discourses. Likewise, DH has been characterised as a COP.[7]Siemens, R. (2016). Communities of practice, the methodological commons, and digital self-determination in the Humanities. Digital Studies/Le Champ Numérique. https://doi.org/10.16995/dscn.31 This is not to say that a COP is homogeneous. COPs contain both core and peripheral members, A COP may contain multiple nested COPs.[8]Wenger, E. (2000). Communities of Practice and Social Learning Systems. Organization, 7(2), 225–246. https://doi.org/10.1177/135050840072002 Continuing my example, while the entire history discipline might be described as a COP, this contains COPs for subfields interested in different periods such as ancient, pre-modern, modern, contemporary history, or in different geographical areas such as French, German, or European history.

Rather than their institutional embedding, COPs are defined by, as the name suggests, their practices: “doing in a historical and social context that gives structure and meaning to what we do.”[9]p. 47, Wenger, E. (1998). Communities of Practice: Learning, Meaning, and Identity. Cambridge University Press. These practices include both explicit and tacit knowledge. Sharing tacit knowledge among members of a COP tends to involve face-to-face interactions to achieve enculturation; gradually acting in accordance to the norms of a COP. The framework thereby puts local communities at the forefront rather than global communities.[10]Brown, J. S., Collins, A., & Duguid, P. (1989). Situated Cognition and the Culture of Learning. Educational Researcher, 18(1), 32–42. https://doi.org/10.3102/0013189X018001032[11]Duguid, P. (2005). “The Art of Knowing”: Social and Tacit Dimensions of Knowledge and the Limits of the Community of Practice. The Information Society, 21(2), 109–118. https://doi.org/10.1080/01972240590925311 This is a more suitable approach to DH, as I argued in the previous blog post.

Very large COPs may furthermore be described as epistemic cultures:[12]Knorr Cetina, K. (1999). Epistemic Cultures: How the Sciences Make Knowledge. Harvard University Press. Epistemic cultures are characterised as self-referential systems, for example in the sense that historians are trained by other historians at history departments, read work from other historians, are supervised by a historian during their PhD, and when staying in the academy, usually try to end up at a history department at some university. The concept not only intends to describe the practices of scholars, but how those practices are guided by systems of culture. That is, the notion of culture goes beyond the mere practices as behaviour, to describe the “control mechanisms” that govern behaviour.[13]p. 44, Geertz, C. (1973). The Interpretation of Cultures: Selected Essays. Basic Books, Inc.

In this line, disciplinary practices can be investigated as part of disciplinary cultures, including the shared repertoire of language in a community. For example, one study found within the history discipline words of praise included “scholarly” and “original”, while words of condemnation were “trivialising” and “thin”. A taboo was to misuse evidence to prove one’s point, rather than to try and gain alternative perspectives.[14]Becher, T. (1981). Towards a definition of disciplinary cultures. Studies in Higher Education, 6(2), 109–122. https://doi.org/10.1080/03075078112331379362

Yet cultures are always changing and shifting. Communities constantly renegotiate their joint enterprise, and continuously develop their shared repertoire. In the COP framework, this is called the shared history of learning, which is the defining characteristic of any individual COP.[15]Wenger, E. (1998). Communities of Practice: Learning, Meaning, and Identity. Cambridge University Press. COPs thereby create boundaries that serve both to keep people in as well as keep people out. As a temporal characteristic of COPs, this means COPs change over time, commonly following interactions with other COPs. Defined as boundary practices, participants from different communities may try to bring practices together. These practices are arguably simultaneous strategies of divergence and convergence. Participants perform boundary work, as described above, in order to separate communities. At the same time, participants perform exchanges, bringing the communities together.

In the next post I will elaborate these exchanges between communities, and discuss DH according to the concept of trading zones. 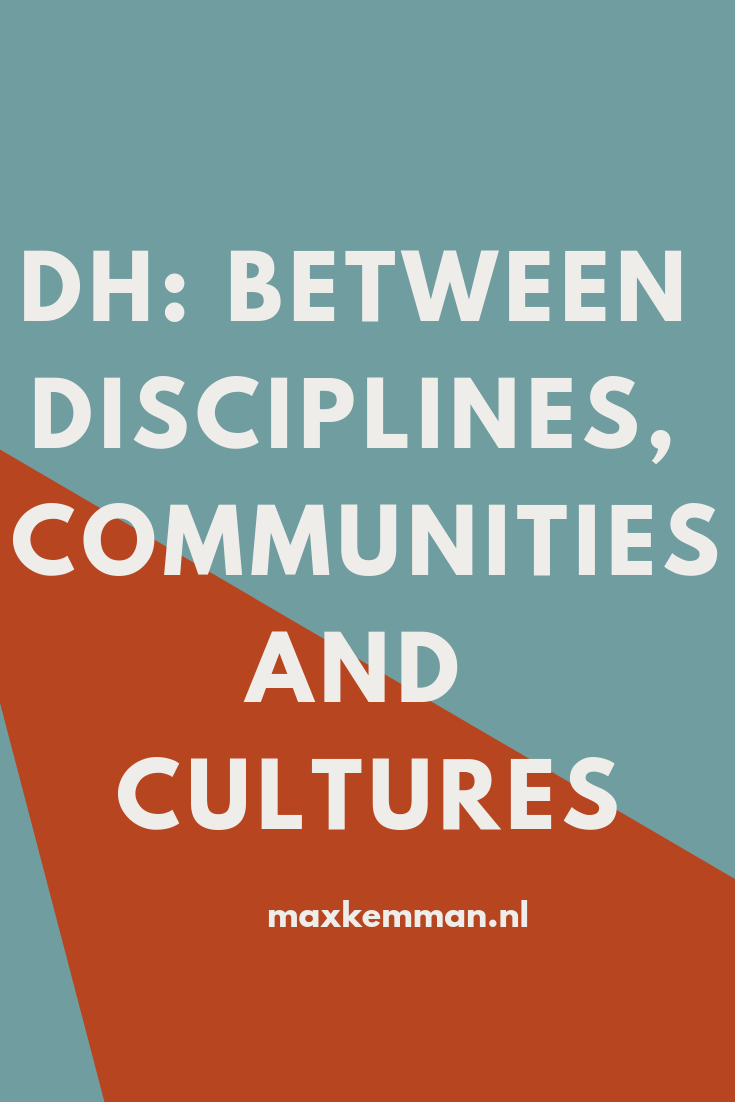