Interdisciplinarity is becoming increasingly popular within and outside DH to describe the interactions between multiple disciplines. In the case of DH, the most common conception might be the interactions between e.g., historians and computer scientists. Interdisciplinarity is however just one form of cross-disciplinarity. Three forms are distinguished in the literature:[1]Choi, B. C. K., & Pak, a. W. P. (2006). Multidisciplinarity, interdisciplinarity and transdisciplinarity in health research, services, education and policy: 1. Definitions, objectives, and evidence of effectiveness. Clinical and Investigative Medicine, 29(6), 351–364. https://doi.org/10.1016/j.jaac.2010.08.010[2]Rosenfield, P. L. (1992). The potential of transdisciplinary research for sustaining and extending linkages between the health and social sciences. Social Science & Medicine, 35(11), 1343–1357. https://doi.org/10.1016/0277-9536(92)90038-R﻿

Central concerns are to what extent participants apply a disciplinary perspective or approach to a problem. Interestingly, all forms assume that participants do start from a disciplinary position. Alternatively, transdisciplinarity has been argued to emphasise the inclusion of non-academic partners,[3]Huutoniemi, K. (2010). Evaluating interdisciplinary research. In R. Frodeman, J. T. Klein, C. Mitcham, & J. B. Holbrook (Eds.), The Oxford Handbook of Interdisciplinarity (pp. 309–332). Oxford University Press. especially relevant in recent discussions of citizen science. In the context of DH, this opens up questions of the inclusion of GLAM in scholarship, as well as public humanities. Yet transdisciplinarity has mainly received increased attention in recent years for supposedly being better able to understand the complexity of real-world phenomena.[4]Gibbons, M. (1994). Introduction. In Z. Baber, M. Gibbons, C. Limoges, H. Nowotny, S. Schwartzman, P. Scott, & M. Trow (Eds.), The New Production of Knowledge: The Dynamics of Science and Research in Contemporary Societies. (Vol. 24, pp. 1–19). https://doi.org/10.2307/2076669

While I have provided descriptions in collaborative terms, this is not necessarily the case. A scholar might conduct cross-disciplinary research individually by synthesising academic literature from separate fields. However, this risks information overload, needing to keep up with literature from multiple fields; cross-disciplinarity is arguably easier in a team setting.[5]Wilson, P. (1996). Interdisciplinary research and information overload. Library Trends, 45(2), 192–203. Furthermore, in the previous blogpost I explained why investigating DH as collaborative provides a better perspective, and might give a better insight in what form of cross-disciplinarity emerges.

What form is DH?

Klein has called DH methodological interdisciplinarity to describe the practice of using methods from other disciplines to approach humanistic problems.[6]Klein, J. T. (2014). Interdisciplining Digital Humanities: Boundary Work in an Emerging Field (online). University of Michigan Press. https://doi.org/10.3998/dh.12869322.0001.001 In this sense, digital humanities remains aligned with conceptual understandings of the humanities, rather than transforming their entire perspective as would be the case in transdisciplinarity. Concepts and methods from other disciplines then serve as tools to advance humanistic inquiries.

In my own research, I have seen collaborations where computational experts would develop software in close collaboration with historians, so that historians could use the tool for historical inquiry afterwards. I agree that such DH practices constituted interdisciplinarity. However, in several cases I found the serial approach failed due to constraints of time or data, so that participants resolved to a parallel multidisciplinary approach. That is, if the digital system could not provide meaningful results, historians continued their research by traditional means. This can be seen as risk aversion: since all steps in a serial collaboration are research and thus uncertain, scholars whose main research is later in the chain aim to protect their research from problems in earlier steps.

A better understanding of the different forms of cross-disciplinarity allows a better reflection on what a collaboration wants to achieve. Questions to ask may be whether participants are using non-traditional perspectives and methods, and how tasks are divided. As might become clear from the above discussion, to discuss the entirety of DH as interdisciplinary or multidisciplinary does not do justice to differences between collaborations. While one project might end up truly interdisciplinary (or even transdisciplinary), others will remain multidisciplinary. To better understand DH it should be investigated on a local level, rather than a global level. In the next post I will therefore discuss the difference between historians as part of a discipline or a community of practice. 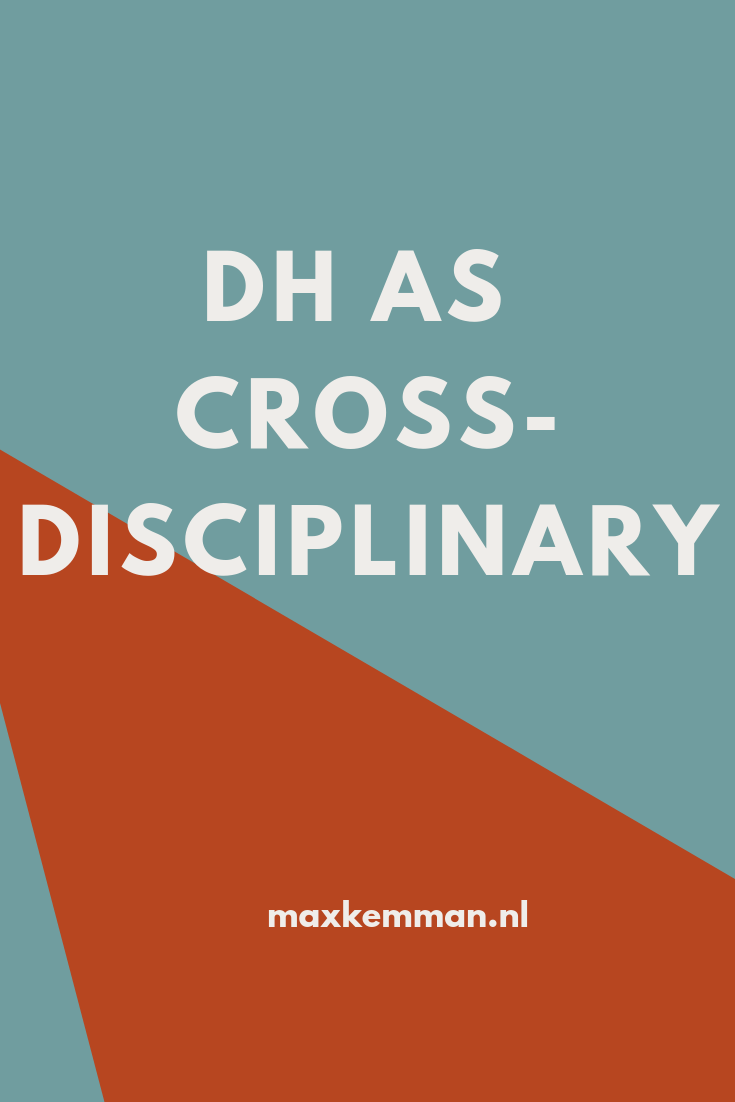