This year marks the fourth annual DHBenelux conference, which cycles through the Netherlands, Belgium, and Luxembourg. This fourth instalment will be held in Utrecht (the Netherlands), and last week the review process was finished and authors were contacted about the decisions. This provides me the opportunity to write down an analysis of submissions to DHBenelux 2017. For previous years, see blogposts related to 2016 and the period 2014-2016. Below I will look at the submissions, authors, and keywords. 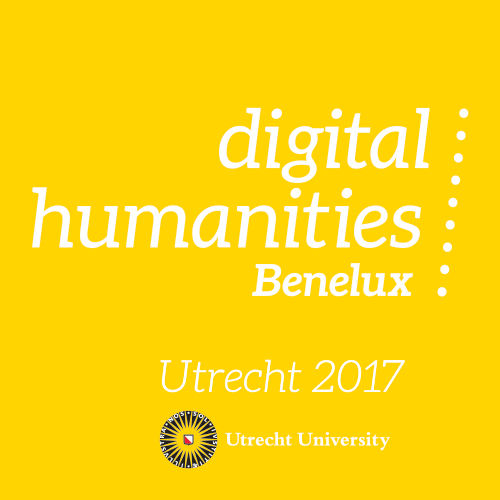 The conference received a total of 101 submissions, which is a decrease from last year’s 116 submissions. This year the formats are a bit different compared to last year, and submissions are separated into the following categories:

These 101 submissions are jointly written by a total of 220 authors, compared to last year’s 204. A total of 25 authors this year were also present in 2016, showing the conference attracted a mostly different group of authors. What’s more, compared to the previous DHBenelux in the Netherlands, only 11 authors return that did not submit anything to the Belgian and Luxembourgish editions, so that the group that returns for the conference in their own country is much smaller than I would expect. After four conferences, only a single author is left that has submitted to all the DHBenelux conferences: yours truly.

In true digital humanities fashion, a lot of papers are co-authored. As you can easily see, the average number of authors per paper is 2.2. Less than half of all the papers are written by a single author: 40. One paper even has 18 authors. There are a couple more papers with more than 5 authors than last year, but overall these numbers are fairly similar. The 220 authors come from 17 different countries. Although this is an increase from last year’s 13, and these numbers once again show the conference is more international than the “Benelux” term suggest, I would argue that this year the conference is actually more mononational: 159 authors (72%) of all authors are from the Netherlands. Belgian participation dropped from 55 (27%) in 2016 to just 19 (9%) in 2017. Luxembourgish participation dropped from 21 (10%) in 2016 to a mere 5 (2%) in 2017. Here I must note that I have mostly counted the nationality of the institution, so that I counted myself and another colleague of Dutch origin as Luxembourgish participation. For reasons of privacy, I have combined all the countries with a single author representing under “Other”, I will say however that this interestingly included 3 Asian countries. See the below chart for a complete overview which shows that apart from 12 authors coming from countries not present in 2016 (Austria, Greece, Ireland, Romania), all other representation from outside the Netherlands is down. This year, the conference organisation provided a list of topics to be chosen, where authors could choose more than one topic. Below I have sorted them by frequency:

Words from the abstracts

When we upload all the submissions into Voyant Tools, we get a more detailed view of what the submissions are about. All the abstracts combined contain 88k words, and 15.1k unique words[1]These are not exact figures, since many abstracts contain the paper title, author names, and references, but some do not. One paper shows in Voyant as having 4500 words, which would be way over the limit, which can be explained by a large network image of terms in the abstract. Finally, I did not combine similar words in this analysis. This review is just to get a sense of the submissions. These are very similar to last year’s figures. The most common word is by far “data”, which occurs twice as often as it did last year. Interestingly, “data” was also the most common word in 2014 when DHBenelux was held in The Hague (the Netherlands), but not in 2015 (Antwerp, Belgium) or 2016 (Belval, Luxembourg). Do Dutch digital humanists write more about “data” than others? Other words typical of digital humanities remain; words such as “digital”, “new”, “different”, “tools”, but also “project” and “user” are prevalent. Overall, it seems DHBenelux did not continue the trend of the last years. The number of submissions is smaller, and while the number of authors is larger, the Dutch more dominant. Moreover, the acceptance rate is back up from last year, meaning my interpretation that DHBenelux was becoming more selective is untrue; rather, as Steven Claessens tweeted, 2016 might have simply been an anomaly. This high acceptance rate has led some reviewers to question what the goal of reviews is, as this year a fairly large portion of papers are accepted despite negative reviews, provided they make adjustments. Finally, I am surprised by the low number of authors that returns to the conference (as author anyway). Although last year I positively concluded that DHBenelux is no clique, it neither seems to be a community. This need not be a bad thing, but it does raise questions about the direction the conference is going.

Update 18 April: As requested by Trilce Navarrete, I have replaced the chart showing author countries with one that compares between 2016 and 2017. I think this is the chart where it makes most sense to compare between the different editions, but if anyone wants me to compare others charts too just let me know