In his recently published book The Big Humanities: Digital Humanities/Digital Laboratories (2017, Routledge), Richard Lane promises to discuss the digital humanities (dh) by looking at three things specifically: 1) an analysis of dh collaborations as labs, 2) arguing for a hacker culture in dh, and 3) discussing the transformed practices of literary studies specifically. Especially the first point made me curious to read the book, as it is closely related to my own PhD research in which dh labs are one type of collaboration I am looking into. However, the book provides little news for either of the three topics. In this blog post I will look a bit at what Lane promises to do and what he ends up doing. 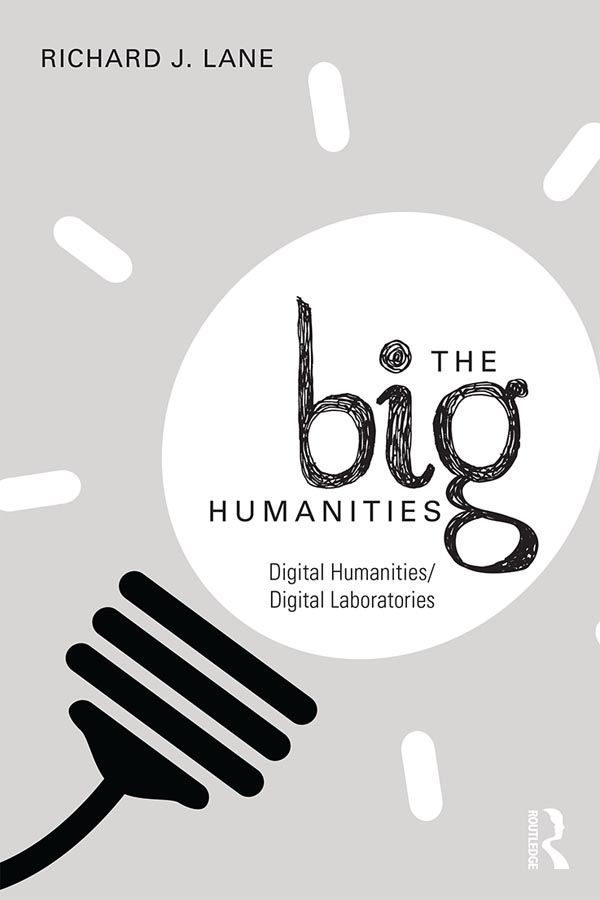 The analysis of dh[1]Lane prefers the term “big humanities” to parallel it with “big science”, utilising big data for big questions. I prefer the term digital humanities to emphasise method and the facilitating role of the computer. The term “big humanities” refers to phenomena already covered by the term “digital humanities”, which I will employ in this blog post. projects as labs would for me be the major theoretical contribution that could have been made. In the books half title page abstract, this focus is said to reveal “affiliations with the types of research that have traditionally taken place in the sciences, namely innovation labs, fabrication labs, maker spaces, digital media labs, and change labs” (p2). In chapter 1, he looks at the concept of ‘lab’ by quoting Knorr-Cetina:

Lane draws interesting parallels of these three features in dh projects, where 1) objects such as sources need not be analysed ‘as is’ but may be transformed for other types of analyses, turning sources into data, 2) research is moved away from physical libraries and archives to the internet where data is always readily available, and 3) there is significant speed up of research where analyses that would have taken years or decades become feasible in much shorter time. I found this an interesting parallel, and one that I certainly find promising for further analysis. Lane unfortunately does not return to the lab concept after the sketching of this parallel, as can be seen from the Voyant analysis in the figure below where you see the terms “lab” and “laboratory” are prominent at the beginning of the book, then almost disappear (only to appear when discussing some specific dh lab), and reappear in the resources and references at the end. Instead, Lane shifts in chapter 2 from labs towards so called “collaboratories”, defined as “an “environment” where the researchers’ “instruments and information are virtually local, regardless of their actual locations”” (p70). This refocusing is done to give attention to virtual collaboration, especially in the form of crowdsourcing. I would have hoped for further mentions of how the blooming of dh centres and labs introduce new practices, or how the concept of a lab “implies experimentation and risk, but also a certain intellectual seriousness“.[3] Smithies, J. (2016). KDL, established 2016. Retrieved November 14, 2016, from https://www.kdl.kcl.ac.uk/blog/kdl-launch/ A discussion of the role of innovation labs and maker spaces, as per the half title, could also have been interesting, but unfortunately none of these return in the book.

The second focus of the book in chapter 3 is on hacking. In the preface, Lane writes “I suggest that a contemporary “digital revolution” will only serve the Big Humanities well if it includes hacking/coding and making skills” (p7). Specifically, Lane discusses the Raspberry Pi as an interesting device to hack with, as it is cheap and does not offer much functionality out of the box, and is thus suitable for digital pedagogy. As a lecturer of digital history, this interests me greatly, as I have followed the developments of Raspberry Pi but never quite knew what to actually do with it. However, here too the discussion falls short; there are no examples of interesting dh projects based on hacking or the Raspberry Pi, nor does Lane describe any of his own efforts in this space. Instead, the chapter focuses on what it means for software to be either “open source” or “free software”, as these are two disagreeing communities. Yet even as a theoretical discussion the book falls short as it fails to discuss any of the sociotechnical dynamics of open source. How to engage people on continuing with your code, how can code be evaluated as a scholarly product, why are humanities scholars seemingly afraid of coding, how do small open source projects relate to large-scale dh infrastructures?[4]For this final point, see Van Zundert, J. (2012). If you build it, will we come? Large scale digital infrastructures as a dead end for digital humanities. Historical Social Research / Historische Sozialforschung, 37(3), 165–186. None of such questions or others are addressed. Illustrative is Lane’s account of GitHub as a site of open source: “GitHub – a software repository with 11 million users, and 27 million projects” (p118). This open source repository is thus merely discussed in its user counts, without mention of what it means to fork projects on the site, whether scholarly code should be in a for-profit repository, what the social dynamics on the site are, etc. In short, hacking and coding are discussed conceptually in the context of open source, but Lane does not describe any of their practices.

Finally, in chapter 4, Lane addresses the transformed practices of dh, and how big data may allow big questions. I wondered why this chapter suddenly focused on literary studies as opposed to a wider discussion of the humanities, and unfortunately found that the answer is that it is mostly a discussion of the works of Moretti[5]Moretti, F. (2013). Distant reading. Verso Books. and Jockers[6]Jockers, M. L. (2013). Macroanalysis: Digital methods and literary history. University of Illinois Press. who have in their books indeed shown wonderfully what new types of research can be done when treating novels as aggregated data, and how this requires new practices. Lane then discusses two data driven projects, but in this discussion adds little to the question of how practices are transformed beyond what was already written in these two works.

The final chapter aims to function as a resource for reading further literature and finding tools of interest. This could be a valuable resource, but by putting it in book-form it essentially becomes inaccessible and doomed to be out of date within little time. I am a fan of the DiRT Directory, but am left unsure why this needed to be redone on paper/in an epub.

Although the preface, which made me buy the book, promises three potentially very interesting intellectual discussions of digital humanities, the book unfortunately fails to deliver on all three of them. The ideas proposed are of interest, but the lack of own experiments means Lane cannot demonstrate any new practices. To instead function as a literature review of the state of dh the book offers too little literature and too little contrasting of opposing view in order to come to any new conclusions. As such the book offers interesting questions, but little in new answers or perspectives to these questions.