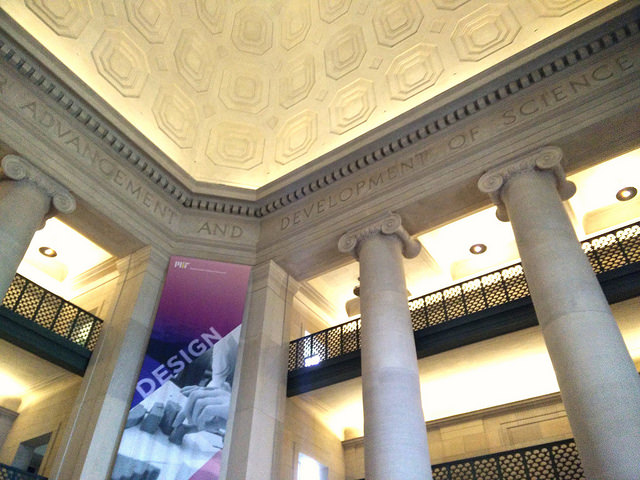 In the first week of June, my supervisor Andreas Fickers and I went to the US to visit several Digital Humanities centres, specifically ones working on Digital History, in Boston (MA), Lincoln (NE), and Fairfax (VA). Since the University of Luxembourg will get its own DH centre soon, we went with the goal of learning how others set up their centre, how DH is incorporated into the curriculum, and how collaboration takes place.

This blogpost is an attempt to summarise what we learned during our visit to the US. The structure I will follow is not chronologically, but by the title of John le Carré’s novel: Tinker (building and making), Tailor (specific versus generic tools), Soldier (collaborations of people), Spy (digital literacy regarding online tracking and other subjects). At the bottom of the blogpost is a numbered list of the people we met; I will refer to sources of information using these numbers.

One of the focuses of several DH centres was on ‘making’, or as Sarah Wolozin put it: tinkering [3]. Perhaps unsurprisingly, this was the core focus at MIT at both the Open Documentary Lab [3] and the HyperStudio [4], which focused on development of respectively digital exhibitions and tools. The CHNM (Roy Rosenzweig Center for History and New Media) is also a prominent example of a development-focused centre, working particularly on their well-known tools Zotero and Omeka [8]. This focus on building resulted in the requirement for staff to be able to code; it is the scholars who should do the tinkering. In their situation, this regularly required significant investment in skills development for grad students. However, what was interesting is that Stephen Robertson explicitly did not recommend our centre to focus on tool development due to it being 1) difficult to start and keep sustainable, and 2) the plethora of available tools that could be put to better use before developing more tools.

This last point was also made by Jamie Folsom [4]: instead of building newer and better tools, he proposed to focus on how a tool is compatible with other tools, and what functionality it adds to the existing DH landscape. With this emphasis, the HyperStudio is not interested in developing platforms, but on highly domain-specific projects that are tailored to providing a good solution to a specific scholar with a specific research problem. Similarly, Stephen Robertson explained a disciplinary focus on just historians: in his experience, general discussions of technology for the humanities led only to confusion about how it would apply to a scholar’s own research [8]. Moreover, at CHNM all PIs are historians and most programmers have a history background so that tools are built to be used by the centre staff themselves. A result of this is that the development cycle can be ‘fast and loose’, involving very little user research. This can however result in tools that are useful to a wider audience: Zotero has a vast user-base, and both Zotero and Omeka act as platforms with communities developing plugins.

Historians should thus be at the centre of the development process. The DPLA has a historian as a director and, according to Dan Cohen, this introduced a more user-centred rather than technical perspective [1]. Rather than doing user research to elicit user requirements, he stressed the utility of co-development. A recurrent theme is that all these centres included both technical and humanities people. At CDRH (Center for Digital Research in the Humanities), this included four technologists, sometimes supplemented with students from CS: two programmers, one specialist in metadata encoding, and a digital development manager & designer [6]. What surprised me however is that contrary to European DH projects there is very little interdisciplinary collaboration between different departments or universities. Instead, these centres originating from humanities departments hired their own programmers and web designers, or were autodidactic programmers with a humanities background as described above for the CHNM. This does not mean there is no collaboration: especially at CDRH there was a tight link with the history department, with digital methods courses offered by CDRH to students of history.

Several centres provided education with a focus on digital literacy. Sarah Wolozin explained the importance of teaching students how the web works and how online tracking occurs [3].  At the history department at the University of Lincoln-Nebraska, all students are required to get their ‘certificate in DH’ [5]. Rather than creating a specific master in Digital History, digital methods are incorporated into the entire history master. Education focused on using digital methods in historical research, and let students actively try to create a database to encounter problems and questions. William Thomas underlined that to really get students’ interest it is important to explain these methods around a historiographical problem for the students. To further develop this, the curriculum is changing from traditional lecturing to project development and practice [5]. An interesting outcome of this is the Digital Scholarship Incubator, where grad students receive funding to conduct a digital research project and are embedded in the CDRH [7]. These grants are specifically for students with ambitions for an academic career, so that CDRH is heavily invested in training future DH scholars.

As we can see, there is not just one way to go about a DH centre. Although tools play a significant role, the extent to which a centre should invest in developing these differs. Centres also varied in how they implemented education; as a specific DH course, as methods within the general programme, or as a faculty task outside of the centre. What all these centres agreed on though, is that for successful Digital History, both tool-development and education are to be centred around the historiographical questions.

For my own PhD research into Digital History as trading zone, the organisation of these centres is of great interest. As described above, while in Europe many DH projects are a collaboration between departments or universities, what we saw here are projects within a single centre. This creates a different configuration of the three dimensions of trading zones of cultural maintenance, coercion, and contact & participation (see Digital History as trading zone). First, this organisation alleviates the tension of heterogeneity of ‘what constitutes research’ for historians and technologists, as the technologists do not have to comply with the epistemic culture of computer science. In more heterogeneous situations, such as DPLA, we saw that the directors or PIs are historians, so that the historical perspective remained central. Second, whether we should interpret this as technologists being coerced to comply with the epistemic culture of history is something I need to investigate further. This is obviously not the case where historians are the programmers themselves. Finally, centres work with very direct contact & participation. At CHNM, the main room featured a long table where most of the people present sat to work and have lunch. These are findings that should be investigated further, how do they constitute different trading zones? For now it confirms my method of investigating Digital History as local trading zones: the trading zones we have seen in the US are significantly different from one another, and even more so from what we have seen thus far in the EU.

1 thought on “DH in the US: Tinker, Tailor, Soldier, Spy”