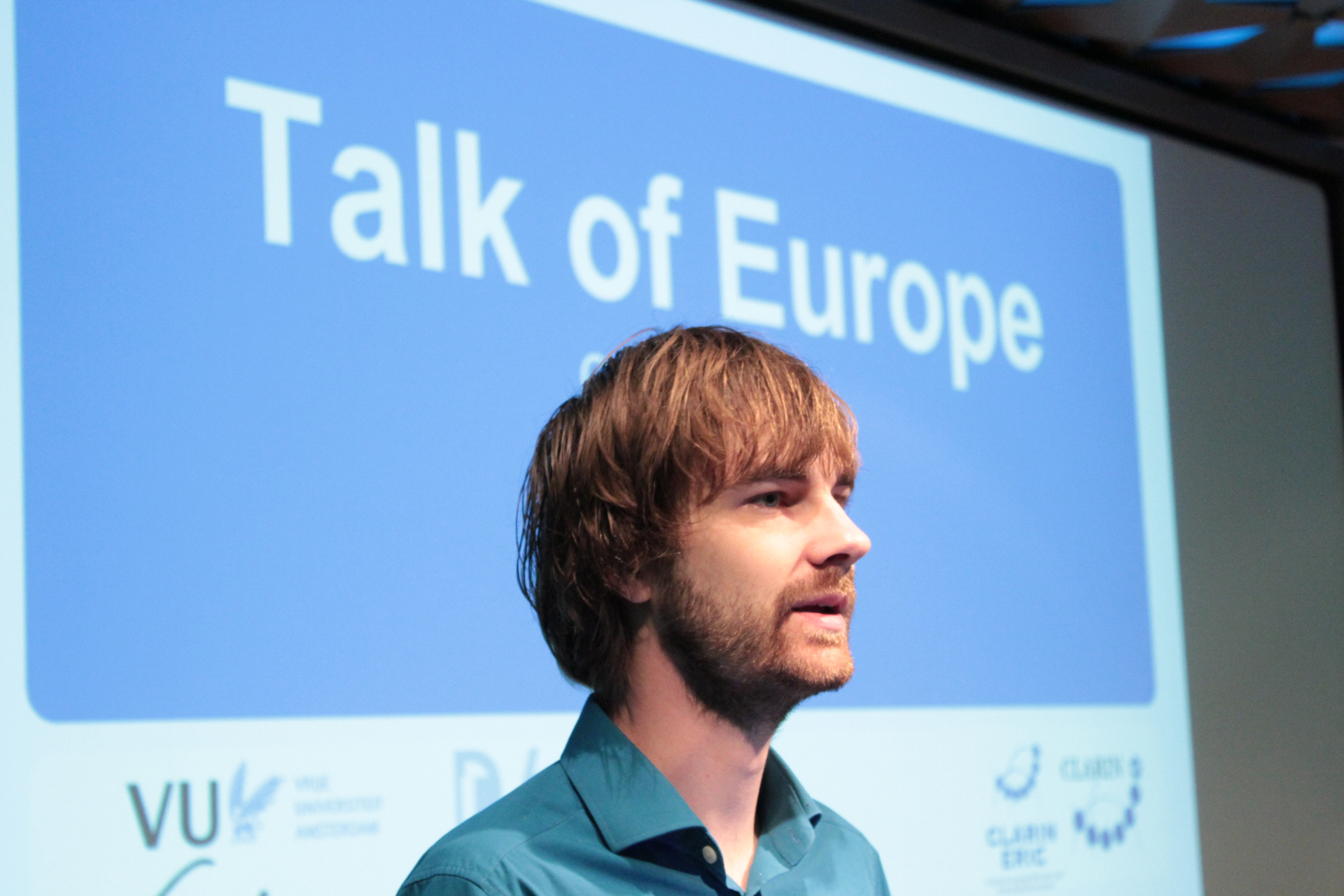 From Monday 6 to Friday 10 October, the Talk of Europe project held the first creative camp at the Netherlands Institute for Sound and Vision in Hilversum, the Netherlands. The goal of the creative camp was to create proof-of-concept applications that make inventive use of the ToE dataset, consisting of Linked Data about the European Parliament. Following a call for participation, five teams participated from the Netherlands, Luxembourg, Norway, Italy and the UK; ten participants (not from the ToE-team) in total.

Monday morning started with a plenary session with introductions to the creative camp, the wider CLARIN framework and the dataset produced by Talk of Europe. Moreover, Henri Beunders (Erasmus University Rotterdam) gave a keynote on European politics, and how difficult the process is to understand. This complexity of the European Parliament imposes limitations on the datamodel, but also provides opportunities for research. Willem van Hage (SynerScope) demoed a rich visualisation of the ToE-dataset; a circular network graph that allowed to investigate the relations between different entities or properties in the dataset, such as which countries hold the most speeches in a given time frame. The rest of Monday and the entire Tuesday the participating teams spent behind their laptops, querying the sparql-endpoint and developing tools.

On Wednesday we organized a plenary workshop in which invited speakers talked about their research, and each team provided a short demo of their project. Bjørn Høyland (University of Oslo) talked about the advantages of automatically creating a dataset for political scientists. This resulted in a dataset on Members of European Parliament which provided valuable data for the ToE dataset. The most important advantage is perhaps that errors in the data, that are bound to be there, can be fixed much more easily since it only requires running the script again rather than hiring new assistants. Sander van der Waal (Open Knowledge) talked about the power of open data, and how Open Knowledge promotes open data for governments. After lunch, Maarten Marx (University of Amsterdam) showed what kind of analyses become possible when all political speeches are made into machine-readable data. Which parties talk of which topics or who responds to whom become easily answerable questions. Finally, Doru Frantescu (VoteWatch Europe) showed their efforts to make European politics transparent by aggregating information on attendance and votes disseminated in PDF and Word documents.

Surely inspired by these talks, Thursday and Friday morning were spent behind the laptops again. On Friday afternoon, the teams presented their final results of the week, as well as their goals for the future. We have asked all teams to write a post about their progress of the week and will publish these online soon.

We consider the first creative camp a success. The participants came up with tools that we had not considered yet when we developed the dataset, showing how linked open data allows repurposing. Moreover, we have learned a lot for the next creative camp, which we expect will be even better.

We tweeted with the hashtag #TOETCC, and collected all tweets in this Storify. Photos of the week are online here.

Talk of Europe is a collaboration of Erasmus University Rotterdam, VU University Amsterdam, DANS and the Netherlands Institute for Sound and Vision. The project was initiated by CLARIN-NL and CLARIN ERIC and made possible with funding by NWO and the Ministry of OCW.

If you want to stay up to date on further progress, you can subscribe to our mailinglist or follow the blog.