This year the first edition of DHBenelux will be held 12 & 13 June in the Hague, the Netherlands; a conference for Digital Humanities in the Netherlands, Belgium and Luxembourg. I’m glad a local conference is being organized to promote DH (easy travel!). Obviously I didn’t want to miss out this conference, so we’ve submitted two abstracts that were both accepted. Below are the abstracts for presentations on Talk of Europe and Oral History Today that I’ll be presenting.

Political institutions increasingly open up their parliamentary proceedings to the general public. This results in an abundance of data that are useful in disciplines such as political science, social science, and history. However, this information is generally published in non-machine readable formats such as HTML or PDF, restricting research activities to manual analyses on datasets of limited size.

In recent years, efforts have been made to curate parliamentary debates as structured data (Gielissen & Marx, 2009) and represent them as linked data (Juric, Hollink & Houben, 2012). By using the machine-readable linked data format Resource Description Framework (RDF) to describe metadata items like politicians, parties and speeches, advanced information needs involving combinations of and relations between these items become resolvable. The PoliMedia project, which resulted in a unified search system of topics covered in the national parliament, radio broadcasts and newspapers (Kleppe et al., 2014), demonstrated that linked political data allow for interesting applications.

The current project, Talk of Europe (www.talkofeurope.eu), builds upon PoliMedia, broadening its scope to the European Union. This project has two ambitions. The first is to curate all data on the plenary debates of the European Parliament from 1996 onwards, available in 21 languages, and convert these to RDF. To ensure wide applicability in political research, the data are enriched with biographical and political information on the speakers, building upon the work of Høyland, Sircar & Hix (2009). The second aim is to showcase the potential of this interlingual, enriched and interlinked political dataset in research and in application development and to stimulate pan-European collaboration. To this end, developers and scientists of different countries and disciplines are brought together to explore possible links with other datasets and to create proof-of-concept applications.

The poster will present the data model and its embedding in existing Linked Open Datasets, showing the current semantic framework and inviting peers to provide feedback. Furthermore, workshop visitors will be enabled to interact with the dataset through a SPARQL endpoint, an RDF-based search application.

Oral History collections provide interesting insights on personal experiences of the recent past that cannot be found in traditional archives and written documents. Narrators are asked to recall their personal history so that it can be recorded, either with audio or video-equipment, and used as a source of knowledge. As recalling factual events and attributing meaning to them are intertwined in the narratives, collections as these can be equally relevant to historians, as to anthropologists and psychologists.  Although the practice of consulting such archives is strongly rooted in Anglo-Saxon academic tradition, in the Netherlands it is a fairly new phenomenon. One of the obstacles is the limited access to the content. Discovery of material is difficult because collections are seldom integrated, but instead offer their own search tools. Moreover, some of the collections contain up to thousands of interviews, of which each can be several hours long. Consequently exploring and analysing this kind of material can be difficult and time-consuming.

In the Oral History Today (OHT) project (www.verteldverleden.org) a search portal was developed with the aim to alleviate these difficulties. In a previous project, several oral history collections were integrated enabling scholars to explore these collections using a single portal (Ordelman & De Jong, 2011). In the OHT project, we built upon this work by developing a search tool with a process of co-development (Kemman, Scagliola, De Jong, & Ordelman, 2013). Scholars and technology specialists collaborated closely in order to create a research environment that supports the information needs of scholars. Within the entire research process of scholars of discovering and investigating material, presenting research results and preserving research data (De Jong, Ordelman, & Scagliola, 2011) we focused on the initial stages of exploring archives and selecting relevant sources.

Due to the large number of interviews available and the even larger number of topics discussed in these interviews, we developed a visual search interface that provides overview and zooming facilities. Two visualisations were included to support visual exploration: word clouds and visual facets. The first, word clouds, provide a textual overview of topics present in either the entire archive, the search results returned, or of a specific interview. The second, visual facets, provides a visual overview of the search filters related to search results. Each search filter, e.g. to filter by  spatial coverage as shown in figure 1, is represented with a bar showing all values of the filter with different colours. As such, the user can acquire an overview of the search results and interact visually with the search filters.

In the future, we intend to expand the number of oral history collections available by helping archivists to expose their collections to the OHT index. Moreover, additional user research will be undertaken to learn more about how scholars explore oral history archives. 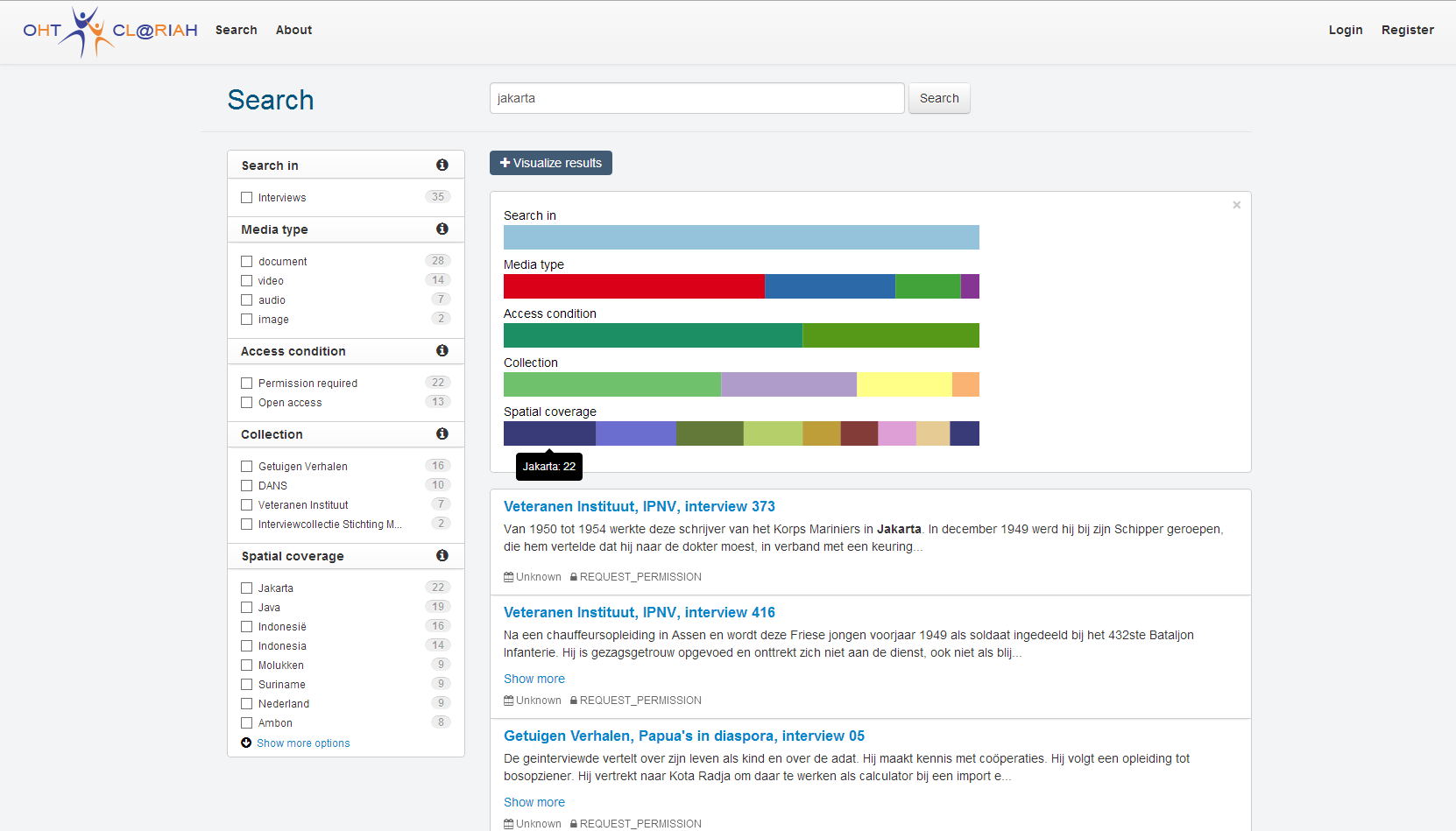 De Jong, F., Ordelman, R., & Scagliola, S. (2011). Audio-visual Collections and the User Needs of Scholars in the Humanities: a Case for Co-Development. In Proceedings of the 2nd Conference on Supporting Digital Humanities (SDH 2011). Copenhagen, Denmark.